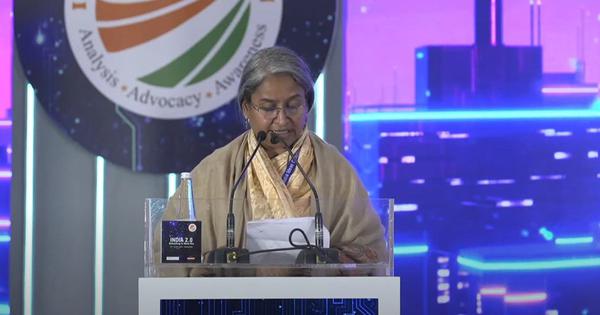 Bangladesh’s Education Minister Dipu Moni on Saturday called for the protection of minorities in India at an event in Bangalore.

Moni made the remarks during a session titled “[email protected]” at the India Ideas Conclave, organized by the India Foundation – a think tank associated with the Bharatiya Janata Party and the Rashtriya Swayamsevak Sangh, according to The Indian Express.

“For India to become one of the respected global powers, it must realize the dreams of the founding fathers as enshrined in the Constitution,” Moni said at the event. “Protecting and securing the basic rights of citizens can pave the way for India to unleash the potential of its citizens, especially people belonging to Scheduled Castes, Scheduled Tribes, OBCs. [Other Backward Classes] and women from all walks of life.

Moni said a social stratification, as unique as India’s, not only disenfranchises weaker sections, but also leaves room for divisive policies and approaches.

“Restoration of their [weaker sections] dignity and saving them from exploitation can enable them to emerge as a new force in society and become equal partners in advancement,” Moni remarked.

The Bangladeshi leader added that an “impartial application” of the provisions of the Constitution relating to freedom and religious affairs can enhance community harmony and maintain peace.

“Similarly, protecting the interests of minorities with a distinct language or culture in any part of Indian Territory can save them from the influences of the majority in the area concerned and help avoid sectarian tensions and violence. “, she said. “And these are applicable to all our countries.”

She added: “As India moves towards its 100 years of existence, it will have to design a comprehensive construct that adequately reflects all the aspirations that the framers of the Indian Constitution espoused.”

His comments came after a group of former civil servants, under the banner of the Constitutional Conduct Group, in an open letter to Prime Minister Narendra Modi last month, said anti-conversion laws, beef bans, teardown campaigns and uniform dress in educational institutions are used to “sow fear” among members of minority communities in India.

“We are witnessing a frenzy of heinous destruction in the country where at the sacrificial altar are not only Muslims and members of other minority communities but the Constitution itself,” the signatories said.

However, another group of former judges and bureaucrats had alleged that their counterparts’ exercise was “anti-Modi” and was only meant to attract international attention.