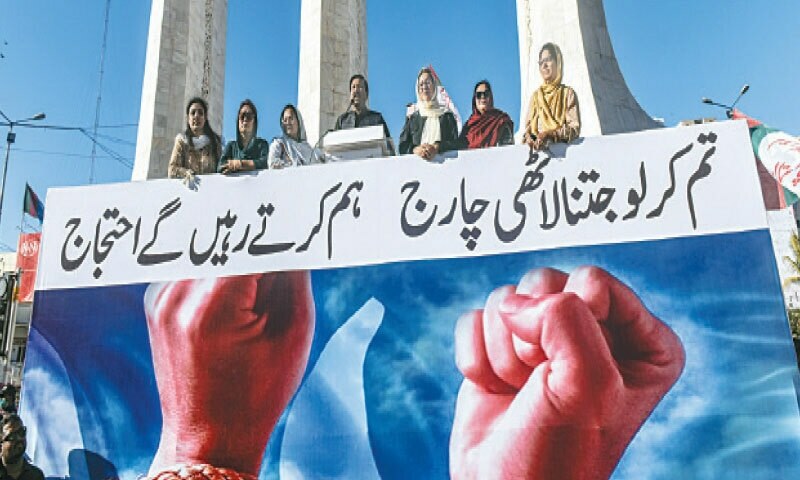 KARACHI: A large number of women, including human rights activists and civil society members, participated in a protest organized by the Muttahida Qaumi Movement-Pakistan (MQM-P) at the Teen Talwar Junction in Clifton in protest against recent action against women and children.

They condemned what they called police brutality against participants in Wednesday’s MQM-P rally against the controversial Local Government Law and the silence of the Pakistan People’s Party leadership over the continued exploitation of Sindh urban.

MQM-P leaders and human rights activists, while addressing the women-only protest, questioned the “criminal silence” of PPP President Bilawal Bhutto-Zardari who, although he is chairman of the National Assembly’s Standing Committee on Human Rights, did not bother to say a single word about the recent Karachi police attack on women and children.

They called him a “double standard” of the ruling PPP, which on the one hand describes itself as the “champion of human rights” and on the other uses “all tactics” to silence the voice of his opponents.

Apart from party leaders, the protest was also attended by Mahnaz Rahman of the Aurat Foundation, women’s rights activist Sheema Kermani and other members of civil society.

Addressing the protest, MQM-P Senator Faisal Subzwari said the PPP Chairman never took a second to issue a statement if a human rights violation was reported in any party from the country. “But when it comes to Sindh and police brutality against our sisters and mothers, he chooses to remain silent.”

The protest also passed a resolution rejecting the Sindh Local Government (Amendment) Bill 2021 and demanded action against police officers involved in the abuse and attack of MQM-P workers.

Student loan debt is hurting the mental health of most borrowers