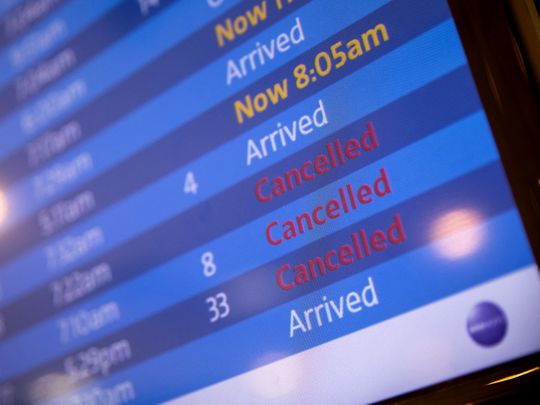 New York: The global travel chaos that rocked the Christmas weekend spread through Monday with large flight cancellations affecting millions returning from vacation, as COVID-19 cases reach record highs in Europe and half a dozen US states.

Some 11,000 flights have been cut globally since Friday, and tens of thousands more delayed, during one of the busiest travel times of the year – with several airlines saying spikes in cases of the Omicron variant caused staff shortages.

The effects have reverberated around the world, with around 2,500 flights already canceled on Monday and 800 more on Tuesday, according to FlightAware flight tracker.

The highly transmissible Omicron strain has skyrocketed cases, once again disrupting lives and a global economy battered by nearly two years of a pandemic – with the English Premier League the latest to report a record 103 players and staff members had tested positive last week.

Governments around the world are scrambling to boost immunization – pointing out that the overwhelming majority of hospitalizations and deaths occur among the unvaccinated.

But in the United States, cases are already on track to hit record highs in January, fueled by large pockets of unvaccinated residents as well as a lack of access to quick and easy testing.

President Joe Biden said Monday that some US hospitals could be “overwhelmed”, but the country is generally well prepared for the latest wave and Americans do not need to “panic”.

In a virtual White House meeting with a few dozen state governors and top health advisers, Biden stressed that the rapid spread of the Omicron variant would not have the same impact as the initial outbreak of COVID-19 a year ago or the Delta soared this year.

â€œOmicron is a cause for concern, but it shouldn’t be a source of panic,â€ he said.

Biden’s administration has pledged to increase testing availability in the coming weeks – and the president reiterated that pledge on Monday.

U.S. states including Delaware, Hawaii, Massachusetts, New Jersey, and New York, as well as the island territory of Puerto Rico, have reported more cases of the coronavirus in the past seven days than at any time in the past seven days. pandemic, according to data compiled by The New York Times.

“It is clear that we are on a vertical climb,” White House senior pandemic adviser Anthony Fauci told National Public Radio on Monday, addressing the Times data.

Nationally, the United States is approaching the daily record of 250,000 cases recorded last January in the world’s worst-affected country, which has lost more than 816,000 people to the pandemic.

The New York Department of Health said COVID pediatric hospitalizations have quadrupled in the past two weeks as Omicron settles in.

In Florida – a global hub for the cruise industry, where new cases quadrupled in the week to December 23 – authorities are monitoring dozens of ships after at least two ships recorded outbreaks of COVID .

Brenda Hammer, who was due to board the Odyssey of the Seas, a Royal Caribbean cruise ship, told AFP: “I’m a little nervous about this. I wasn’t sure I always wanted to to come.”

Earlier this week, 55 people on the ship tested positive for COVID, despite 95% of those on board having been vaccinated, the company said.

Thousands of weekend flight cancellations were linked to Chinese carriers, including many flights to and from Xi’an, where authorities are working to contain the country’s worst COVID outbreak in 21 months .

Desperate to keep a lid on the pandemic ahead of the Beijing Winter Olympics in February, China stuck to a “zero-COVID” strategy, involving strict border restrictions, long quarantines and targeted lockdowns . But there have been sporadic outbreaks.

Some 13 million residents are already confined to their homes in Xi’an, where COVID controls were tightened to “the strictest” level on Monday, banning residents from driving.

Two other Chinese cities have also reported a Xi’an-related case, with authorities urging migrant workers not to return home during the upcoming Lunar New Year holiday.

OTHER VOICES: ‘Build Back Better’ falters under its own weight | Opinion