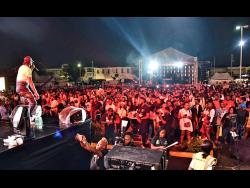 Many years ago an insightful friend of mine pointed out that a nation’s culture is so important that it should be directed/guided and not simply left to find its own way. In this context, culture is defined as: “The arts and other manifestations of human intellectual achievement considered collectively” and “The ideas, customs and social behavior of a particular people or society”.

Culture is a very interesting thing; it is both national and local. It may be so local that it is confined to a specific community. There can be a Trench Town culture, a Beverly Hills culture, and a Portmore culture. Nuances in culture can result in such differences that they can allow an observer to tell them apart. A variant culture that develops within or under the influence of a more widespread culture is a subculture.

The culture is extremely interactive. It is generated by the habits and behavior of a people. This behavior is often influenced by other cultures (generational/inherited, external or dominant). People influence culture as much as culture influences people. It’s an important concept, and that’s precisely why my friend said culture needs to be guided. If left to wander aimlessly under the temporary influence of the whims and habits of ulterior sects and groups, the culture can go wrong.

TO TRANSFORM INTO A SUB-CULTURE

Emerging cultures can easily, and sometimes seamlessly, morph into one or more subcultures. These various subcultures can self-limit and disappear over time. Other subcultures may persist but remain the least important and non-dominant culture. However, a subculture can become so widely accepted, practiced, and inculcated that it encompasses the larger culture and becomes the dominant culture of a community or, indeed, an entire nation. The changes can be so subtle that by the time a nation notices it, the culture has undergone changes under its nose. I have avoided alluding to “evolution” from a subculture to a dominant culture because “evolution” implies positive change, improvement, and that is not necessarily the case.

Cultures can even coexist and achieve homeostasis. Our African heritage is evident in our unique Jamaican language, traditional dances, beliefs, social mores, daily working techniques, and in all of our art and entertainment forms. There is a cultural input from our Taino ancestry, Spanish and British infusion. During the time of slavery, ancestral cultures were suppressed in order to strip us of our sense of self-awareness, self-esteem and self worth. Without our ancestral roots to anchor us, we were adrift in an unknown and hostile sea of ​​European culture that we never really liked. The emergence of Rastafarianism was perhaps one of the first events of cultural breakdown. This religion sought to provide a much needed Africa-based religion. This dismissed the farce that religion is primarily a Caucasian construct.

The other big cultural upheaval took place in the music industry. We invented Jamaican music, from ska to regular rock to reggae. All genres have achieved international acceptance and fame, but reggae has taken the entire planet by storm, thanks to our musical geniuses and superstars. However, although reggae has not transformed, it has had an offshoot in the form of disc jockey (DJ) music. It is believed to have strongly influenced the art form of American rap music. DJ music has also formed the basis of dancehall music.

Dancehall music has grown exponentially because the background beat is easy to generate. Although the lyrics require a great deal of innovation and talent, they are often inspired by the difficulties of our many inner cities. Therefore, thanks to a society that has treated inner city citizens as havens, not given the same attention and care as our middle and upper class citizens, the material for dancehall lyrics is limitless. Unfortunately, these lyrics are heavily influenced by the poverty, suffering, hatred, violence, carnage and sex that permeate many inner-city environments. More importantly, many young people see dancehall music as a way to escape poverty.

Culture has cross-links with the general behavior of a nation, and our general behavior reflects our culture. A look at our day-to-day interactions, and just a glance at the absolutely horrible way too many of us use our roads, will give you insight into the negative side of our culture. Aggression, violence, selfishness, cruelty and lawlessness are all evident in our streets. A loss of respect for life, corruption, cheating and breaking the rules, in our attempt to move on, tell us what we are quickly becoming.

Outside nations have pirated our “culture”, kept it pure and profited greatly from it. This is particularly the case with reggae. Now we have to specify “Jamaican” reggae because others have copied it and become proficient. Jamaicans don’t own reggae, but we dominated it until dancehall came along and replaced it here at home. It’s no wonder SOJA, a predominantly Caucasian reggae band based in Virginia, won the 2022 Grammy Award for Best Reggae Album.

It’s sad that we’ve struggled to find Festival-worthy songs for our upcoming 60th Independence celebrations. I’m not surprised, because small cultural disparities become wildly divergent over time. Things will only get worse if ignored. It is an alarm signal. Our culture represents the heart of our nation – our heart is broken.

From rock school to goodwill hunting

Distress Social Relief Grant – why the state is sti…