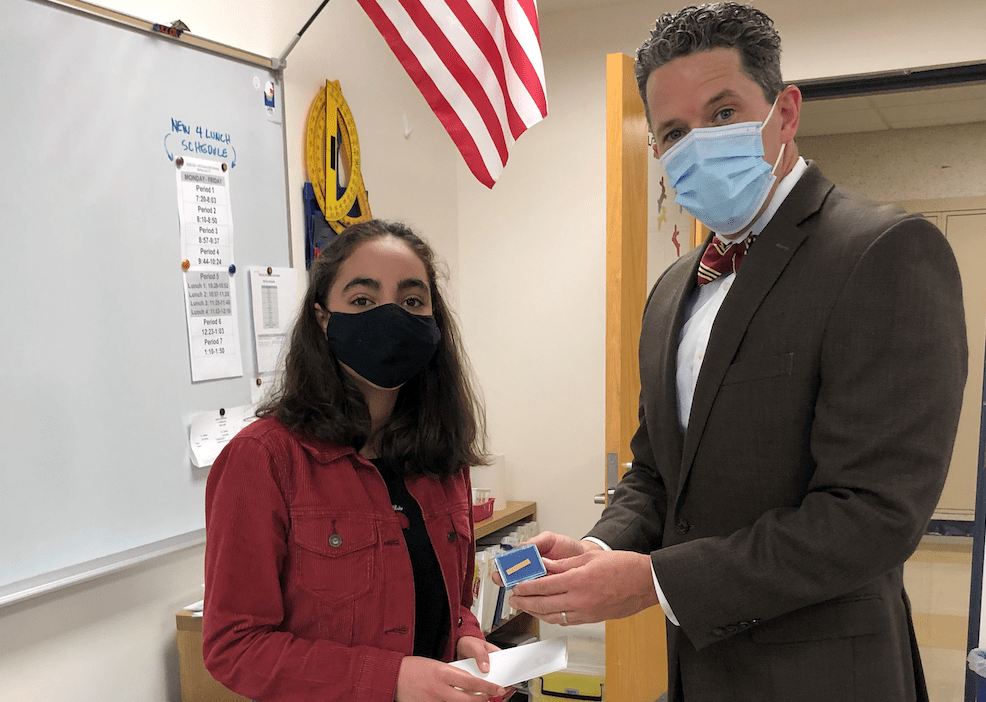 NORTHBOROUGH / SOUTHBOROUGH – Students at Algonquin Regional High School (ARHS) who are members of the school’s math teams and its Mathematics Honor Society are not new to the types of challenges posed by COVID-19 and the 2020-2021 school year. In fact, problem-solving is what these students enjoy doing, especially problems related to geometry, algebra, probability, and number theory.

Math teams typically hold practice and competition from September to March each year. The ARHS contributes within the framework of the Worcester County Math League (WOCOMAL). Other schools they compete with include Westborough and Shrewsbury High Schools, St. John High School, and the Advanced Academy of Mathematics and Science.

First-year math team coach and National Honor Society Math advisor Eileen Falcone said this year’s face-to-face meetings could not take place. Instead, the competitions were held remotely and the participants competed individually rather than as a team.

Despite the format changes, the students adapted, competed, gained knowledge and had fun.

â€œIt’s a learning process,â€ said Joshua Cheng, a final year student at ARHS and Math Honor Society. â€œJoin if you love math and aren’t afraid that you won’t know enough. It takes practice.

Isabella Palit, a member of the freshman math team, who started participating in math teams in college, agrees.

â€œIt’s more important to be excited about math and love math than to be good at math,â€ she said. â€œYou will be stuck, but you will pass the obstacle. “

Palit broke through the odds and was named first-year top scorer and recipient of the Tom Severance Scholarship.

Brian Calnan, education technology specialist and coach of the varsity math team, also spoke of his team’s success this year. His team participated in a variety of competitions, some outside the usual competitions, and ARHS students achieved the highest scores.

â€œYou learn so much being on the math team,â€ Falcone said. “It’s not about getting the wrong problems, it’s about solving tough problems with your classmates.”

Cheng said that the process of practicing and working hard helps to get used to other issues, some of which may not have been learned in class yet.

Along with the ARHS math teams, the school also recently re-established the Math Honor Society, incorporating math and community outreach into programming.

â€œThey helped out with math lessons, math games, and shared their enthusiasm for math with younger students,â€ Falcone said. â€œThey really enjoyed it and were disappointed that we couldn’t continue. The impact of these students on the second and fourth graders was so great. We look forward to next year and hope to start working with other schools in the district as well.

Falcone continues to generate interest in math in all students and help them see how math is involved in everything.

Hosting guest speakers, some of whom were Algonquin alumni pursuing career paths using math, and celebrating Pi Day in March are other ways to bring math to students’ lives.