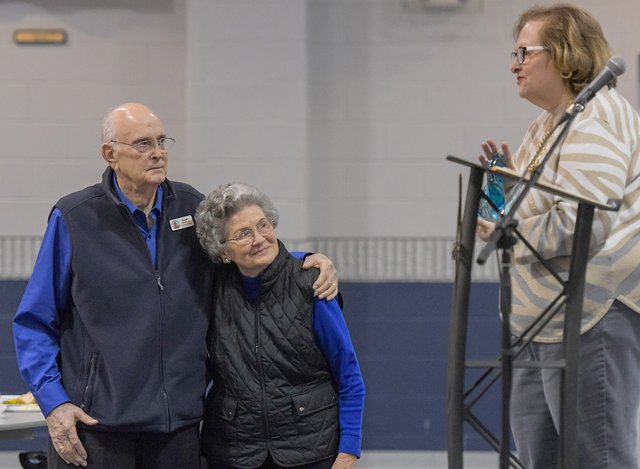 After a 22-month hiatus from face-to-face meetings, the Bulloch County Historical Society held an annual make-up meeting for 2020 and 2021 on Monday, reporting a 30% growth in membership over those two years and handing out awards. award to three volunteers who have worked to preserve historic cemeteries.

But the Bulloch County Historical Society continued some programs and activities during the hiatus and experienced surprising growth, its president, Joe McGlamery, noted in his opening address to members.

“It’s great to be back,” said McGlamery, who is also president of the Statesboro Herald at Morris Newspaper Corporation. “The Bulloch County Historical Society has been very active since we last saw you. We continue to thrive even in this global pandemic. Our membership, I’m happy to report, stands at 392 at this time. That’s a gain of three from our board meeting last week.

“Hideaway Tidbits,” short videos on topics of historical interest and the Historical Society’s projects hosted by its Executive Director, Virginia Anne Franklin Waters, are one of the ways the organization has stayed in touch with its members. “The Hideaway” is the home of Waters and her husband, Bill Waters, a board member who chairs the society’s Historical Markers Committee. With new videos emailed to members typically twice a month, so far there are 55 “Tidbits,” which can be found on YouTube, McGlamery reported.

Georgia Humanities, the state branch of the National Endowment for the Humanities, awarded the Bulloch County Historical Society two grants totaling more than $15,000 to produce the videos, he noted.

In recent months, the Historical Society has resumed groundbreaking ceremonies and placements in its long-term program to install freestanding cast aluminum historical markers. Made to order by Sewah Studios in Marietta, Ohio, with gold lettering and an electrostatically applied finish, the markers retail for around $3,500 each.

In mid-November 2021, members of the Historical Society unveiled a marker for the vanished village of Adabelle and were joined there by descendants of one of its founders, Washington Manassas Foy. It was the 27th and final marker installed by the company, which supports the ongoing program with funding from the Jack N. and Addie D. Averitt Foundation.

Then, on January 6, the company inaugurated the “Kiwanis Ogeechee Fair” and the “Kiwanis Club of Statesboro” at the fairgrounds. In fact, this 26th marker had been erected about two years earlier, before the pandemic delayed dedication plans.

More than 50 people attended each of the recent marker signings, McGlamery noted.

One of the company’s most recent projects involves clearing headstones in Eastside Cemetery, owned by the City of Statesboro. To date, about 800 headstones have been cleaned using a product called D-2 Biological Solution, McGlamery reported. The society has budgeted $25,000 for the Eastside project, and some of the organization’s leaders recently met with city officials to update and enforce cemetery regulations.

“Thank you to all of you for helping us be one of the most successful and active historical societies in Georgia, if not the Southeast,” McGlamery said.

Waters introduced his friend Scott Allen as a guest speaker. An honorary graduate of Statesboro High School and a STAR class student in 1977, he went to the University of Georgia for his bachelor’s degree and then to Vanderbilt Law School for his law degree. His legal career then took him to Augusta, where he met his wife, Sandra.

“Scott has lived in Augusta, Georgia for 35 years and has had a huge impact on his community,” Waters said.

A civil court judge and Richmond County magistrate for 27 years until his retirement from full-time judging at the end of 2020, he continues to handle some hearings as a “senior” judge on appeal.

He has served as a trustee of Historic Augusta, is a member of the Richmond County Historical Society, and serves on the board of directors for the Sacred Heart Cultural Center Relief Fund. Waters noted that Allen received the Philanthropist of the Year award at Augusta several years ago.

Likewise, “her parents were great leaders and contributors” here in Bulloch County, she said.

Her father, Judge Francis W. Allen, who died in 2007 at the age of 83, was a longtime judge of the Bulloch County State Court and once served in the Georgia House of Representatives. Scott Allen’s mother, the late Margie Shuman Allen, owned rental properties and antique stores.

The retired judge shared colorful memories of Statesboro from the 1960s and 70s when he and his brother, the late Francis W. Allen Jr., were growing up here.

For example, when he was a Cub Scout, the den mother was Villette Melton, whose husband, the late Emory Melton, worked at the Smith-Tillman morgue, and the family lived on the second floor. So every Monday afternoon during the school year, Allen and seven or eight other boys met there for Cub Scouts.

“The hearses were a great means of transportation. We went on an excursion. …,” Allen recalled. “Now if there was a body, we had to have quiet times, quiet activities on those Mondays.”

After many more memories, naming many local people, Allen also shared humorous observations from his years as a judge. He then presented the Historical Society with a gift, a framed program from his grandmother Eunice DeLoach Shuman’s 1921 graduation from First District A&M, the regional high school that evolved into Georgia Southern University.

Recognizing volunteer members, the society presented two awards that are not given annually, but “only when earned,” Waters said.

The Jack N. and Addie D. Averitt Lifetime Achievement Award, dated 2020 but as it is the first time since 2015, went to married couple, Rodney and Nadyne Harville, “for a lifetime of dedication to the Bulloch County Historical Society.

Rodney Harville served as president of the company for several years and is currently a member of the board of directors. He and his wife have worked in tandem on every project and still attend nearly every function, Waters said.

“Rodney’s passion is the care and preservation of Bulloch County cemeteries, in fact, all of Georgia’s cemeteries,” she said.

Harville has so far worked with Boy Scouts and other volunteers in cleaning up 22 Bulloch County cemeteries, according to his tally. Some of them were previously hidden by vegetation and debris.

He also planned with the late Sen. Jack Hill to propose legislation for an additional $2 charge on every death certificate issued in Georgia to provide a special fund for the preservation and restoration of cemeteries. Inspired by a Delaware program, that legislation hasn’t moved forward since Hill’s unexpected death in April 2020. But Harville and Waters intend to push again.

The company also presented the Smith Banks Award for Volunteerism, dated 2021, to Burney C. Marsh. This prize was last awarded in 2018.

Marsh “did hours of genealogy work on many families in Bulloch County,” began writing articles for Rambling Through Bulloch and was instrumental in the society’s Eastside Cemetery project, Waters said.

“Bernie also cleaned headstones at Upper Mill Creek Church Cemetery, Lake Cemetery, Hendrix Cemetery and many others in the Friendship Church Cemetery…using D-2,” she said. “He cleaned over 200 in Eastside.”

The Historical Society plans to hold another annual meeting, that of 2022, in June.