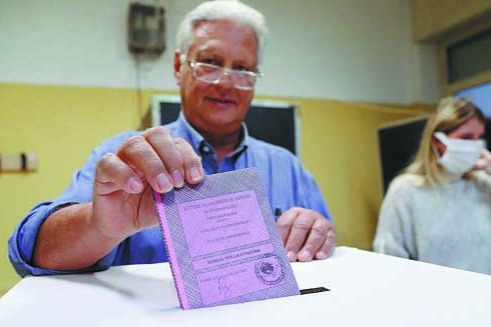 Italy was set to elect its first far-right female prime minister in voting for national elections in the European Union’s third-largest economy which opened on Sunday.

A right-wing coalition led by Giorgia Meloni’s Brothers of Italy was on course to win, according to opinion polls ahead of the vote.

The election was seen as a watershed moment for Italy and for the EU, as the bloc grapples with runaway inflation, the conflict between Russia and Ukraine rages and a winter energy crisis looms.

The election result will be seen as an indicator of the rise of far-right sentiment in the 27-nation bloc, the Associated Press reported.

No party was to win enough seats to govern alone, so the right and the centrists struck a deal that was to bring Meloni to power.

The Brothers of Italy won just over 4% of the vote in the 2018 elections, but recent polls have shown the party could garner up to 25% in this election.

Key issues for voters also included reducing unemployment in the south of the country and introducing a statutory minimum wage, the Financial Times reported.

The right-wing coalition has drawn criticism from outside the country.

European Commission President Ursula von der Leyen has drawn the ire of right-wing League party leader Matteo Salvini after appearing to worry about Italy’s potential swing to the right and apparently suggesting that this could lead to the disappearance of democratic principles.

In a speech on Thursday, von der Leyen said, “Democracy is a constant work in progress; we’re never done; it’s never sure.”

US website Politico said his comments were a hint that the EU could cut off funds to Italy if it was seen as violating the bloc’s democratic standards.

Salvini said his comments posed an “unprecedented threat” on the eve of the election of a sovereign country, although Meloni dismissed them.

Right-wing elements in Italy have voiced support for the policies of right-wing governments in Hungary and Poland that challenge unity within the EU, the Associated Press reported. With an election victory, Italy’s right could begin to align with those countries on issues including rule of law and social policy, as well as migration, the FT said.

The FT said many Italians remain frustrated with the collapse of Prime Minister Mario Draghi’s national unity government this summer. In July, Salvini, Silvio Berlusconi and Giuseppe Conte, leader of the Five Star Movement, withdrew their support for Draghi in a vote of confidence, paving the way for snap elections, which were scheduled for next spring.

Draghi is not standing for re-election, although a liberal coalition including former Prime Minister Matteo Renzi and Carlo Calenda, a member of the European Parliament, is campaigning on his policy proposals. The alliance pledged to reinstate him as prime minister if they win, even though it was expected to get less than 10% of the vote.

Turnout was expected to be the lowest since the first general election in post-war Italy, with the FT reporting that less than 65% of the 51 million eligible voters would cast their ballots.

Italians had to elect new lawmakers for the two branches of parliament, the Chamber of Deputies and the Senate. The first indication of the winner was expected to emerge late on Sunday, with the official result announced on Monday.

President Sergio Mattarella will appoint a new Prime Minister depending on the results. The process of forming a coalition and appointing a new prime minister was expected to last until at least mid-October, Sky News reported.