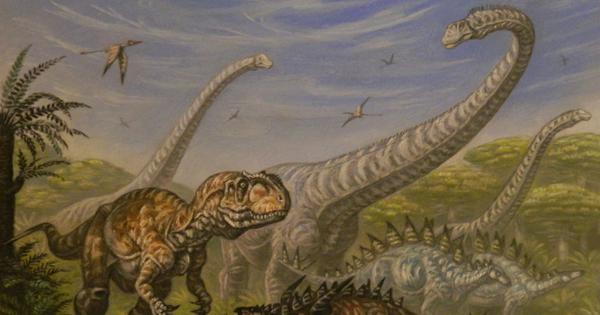 Were dinosaurs callous or caring scaly brutes, well behaved and intelligent? This debate has been going on ever since dinosaurs were first discovered 200 years ago and spilled over into movies and popular consciousness.

In seeking to answer such questions, paleontologists usually look at the closest living relatives, in this case, crocodilians and birds. Do we view dinosaurs as exhibiting complex social behavior like modern birds, or perhaps more rudimentary habits, such as crocodiles and alligators?

Dinosaurs were originally seen as brutal, possibly cannibalistic, and certainly lacking the intelligence or inclination to care for their young. Then, in the 1970s and 1980s, Jack Horner and his colleagues launched a new point of view in their studies of Maiasaura, a herbivorous dinosaur from the Late Cretaceous (77 million years ago) of Montana.

Horner and his colleagues have found evidence that the adult Maiasaura dinosaurs have returned to the same nesting spot year after year, showing enough intelligence to remember the place and appreciate its favorable character, whether it be food access or safety. Their nests in the ground were spaced about seven meters (or a dinosaur’s length) apart, suggesting that, like modern community nesting birds, they enjoyed being close – but not so much that they bite and bicker. This research has seen dinosaurs redeemed as loving parents with advanced social behavior (the name Maiasaura means “good reptile mother”).

In a new study published in Scientific reports, Diego Pol of the Egidio Feruglio Paleontological Museum in Trelew, Argentina, along with international colleagues, claim that this type of behavior can be attributed to the origin of dinosaurs, or at least to the beginning of the Jurassic period, there are 193 million years.

At an ancient Jurassic site in Patagonia, Argentina, the team studied fossils of a species of dinosaur called Mussaurus patagonicus who, according to their new dating analysis, lived at the site around 193 million years ago. Mussaure is a sauropodomorphic dinosaur – an early relative of later giants such as Brontosaurus and Diplodocus – but already showing signs of large size.

The researchers identified 80 individual dinosaur skeletons, as well as nests and around 100 eggs. The nests were shallow trenches in the ground containing eight to 30 spherical eggs arranged in rows and stacked in layers, as we have seen with other sauropod dinosaurs. The researchers used the CT scan to find that some of the eggs contained tiny bones from unhatched embryos inside.

The researchers measured the skeletons and counted the growth rings in their bones to determine the approximate size and age of the dinosaurs. The skeletons included adult adults, perhaps ten years old, subadults (equivalent to adolescents), juveniles and babies. Sizes ranged from babies weighing 70 grams, like a small songbird, to adults weighing around 1.5 tonnes, confirming a relatively rapid growth rate for these long-necked herbivores.

The nests, eggs and skeletons were located at three levels in the rock with a total thickness of three meters. The researchers interpreted the pattern of their nests layer after layer through the rock as evidence that dinosaurs kept returning to the same place (called nest-site fidelity).

It appears that the juvenile dinosaurs traveled with the adults and the entire herd migrated to the nesting site every year and stayed together, perhaps for mutual protection and even to help the laying mothers and their newborns.

These types of nesting sites have already been reported in several localities of the Jurassic and Cretaceous, in North America, South America, Africa and China. This suggests that complex herd behavior was prevalent in all major groups of dinosaurs. But this new discovery predates any earlier identification of this behavior by 40 million years and is closer to the origin of dinosaurs around 250 million years ago.

Can we be sure that these accumulations of skeletons say something about social behavior? If you find a bunch of dinosaur skeletons, it doesn’t mean they lived together. They could have been brought together by a river or a storm.

The same happens today when sudden monsoon rains can flood the landscape and concentrate dead trees, animal carcasses and other debris in fast-flowing streams which then dump their load when the current slows.

However, in the case of the new Patagonian discovery, some features of the ancient soils in which skeletons, nests, and eggs were found – such as traces of plant roots growing in the soil – suggest a certain permanence. Also, the nests were in place and some were undisturbed, containing a full set of intact eggs, some with embryos inside.

This suggests that a crisis has struck, such as a drought and dust storm, causing eggs to bury or prevent hatching. Full skeletons also indicate limited water or wind transport from where the dinosaurs died.

The complex social behavior of the first dinosaurs observed in this research matches other fossil evidence that dinosaurs looked more like birds than crocodilians. It’s likely they all had feathers from the start, as evidence shows dinosaurs and their relatives were warm-blooded creatures.

The first dinosaurs were small, with an upright posture and adapted to sustained running. Social behavior similar to that of birds or mammals from their origins seems acceptable. This view has been controversial for years, but the evidence is mounting: the dinosaurs were warm-blooded, feathered, fast-moving, and exhibited sophisticated behavior.

Michael J Benton is Professor of Vertebrate Paleontology at the University of Bristol.

This article first appeared on The Conversation.

Noam Chomsky says the unvaccinated should just get out of society