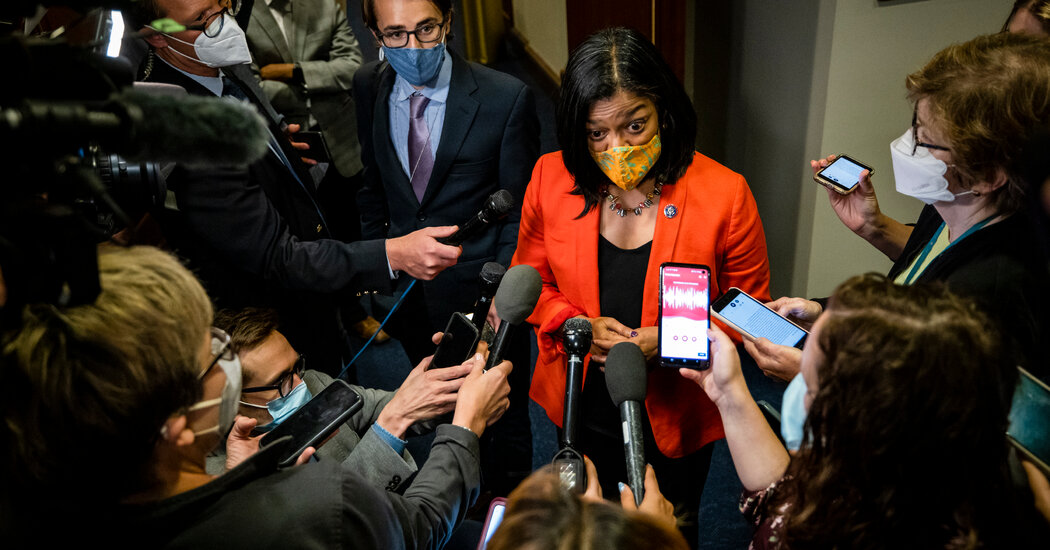 WASHINGTON – Progressive Democrats in Congress, who have long promoted a bold, liberal agenda but often avoided using harsh tactics to get it done, did something unusual this week: They dug.

The nearly 100-member caucus refused to back a $ 1,000 billion infrastructure bill that is a major part of President Biden’s agenda, seeking leverage for a bigger fight.

Their stance forced President Nancy Pelosi to delay a planned vote on the measure and ultimately prompted Mr Biden to side with them by saying there could be no vote on infrastructure legislation until then. a much broader, multi-billion dollar social and climate policy agreement.

The maneuver drew applause from liberal activists who had seen with dismay in the past their allies in Congress give in to pressure from Democratic leaders and go into political battles. And it signaled that progressives were enjoying new influence, including the support of a president long associated with moderates in his party.

“Things only happen here when there is an emergency,” Washington Representative Pramila Jayapal, chair of the Congressional Progressive Caucus, said on Friday. “I’m so proud of our caucus because they stand up for people who feel like they haven’t been heard in this country for a very long time.”

Yet as the progressives won a tactical victory, negotiations continued to downsize the social policy and climate bill, which was already much smaller than the $ 6 trillion to $ 10,000 billion originally envisioned.

Their persistence also risked the collapse of both bills, angering party moderates who had handed over the slim majority to Democrats and are at the greatest risk of losing their seats in the midterm elections.

Despite its growing ranks, the Progressive Caucus has struggled for years to implement its agenda of providing more robust health services, taxing the wealthy, curbing military spending, and tackling climate change. Activists became frustrated helping elect members of Congress, who then lined up, voting for whatever Democratic leaders came up with.

In recent years, the caucus has tried unsuccessfully to cut military spending by 10% and has struggled to embrace major tenets of what it calls its People’s Budget. High-level progressives have protested this year against an expiring moratorium on evictions. But the effort failed to muster enough support for Democratic leaders to put in place legislation to expand it.

This week’s machinations have supported the movement. At a private meeting of the Progressives on Friday night, lawmakers were celebrating as they discussed how they were able to “hold the line” for Mr Biden’s agenda.

â€œThere is no denying that this is a new era of progressive power,â€ said Mary Small, national policy director for Project Indivisible, a grassroots group. “They had a list of their priorities for the reconciliation bill, and they were harassed.”

Ms Small said progressives won the battle of ideas before the battle of tactics: The platform on social spending and climate change presented by Mr Biden largely stems from proposals by Vermont Independent Senator Bernie Sanders and Chairman of the Budget Committee, who was the first Chairman of the Progressive Caucus. But unarmed tactics were also important, Ms. Small said.

â€œThey have a plan to implement their priorities rather than just talking about their preferred policies,â€ she said.

Kaniela Ing, climate justice campaign manager for People’s Action, said many progressive activists were still upset with how Democrats allowed Republicans to weaken the affordable care law with a slew of amendments when the party controlled both houses of Congress. But he now applauds the position taken by the Progressive Caucus.

â€œThey are doing exactly what we need to do,â€ he said. “The strategy is to spend exactly what Biden promised.”

Mr Ing added that progressives were only responding to political maneuvering by centrist Democrats, who sought to pass the infrastructure bill without the broader measures.

The Liberals’ tactics were reminiscent of those employed by the ultra-conservative House Freedom Caucus, whose members regularly threatened to withhold their bloc of votes unless Republican leaders responded to their demands. More moderate Republicans, especially those in competitive districts, became furious with the group, accusing them of obstructing popular bills that were political imperatives.

On Thursday, some politically vulnerable Democrats were also angry with their progressive counterparts for delaying a bill that received broad support.

“When the people of Iowa tell me they are fed up with Washington games, that’s what they mean,” Iowa Rep. Cindy Axne said in a statement after executives said. announced the postponement of the vote on infrastructure. “All at once or nothing is no way to govern.”

But unlike the Freedom Caucus, the progressives’ stance does not appear to have angered their leaders in Congress or the White House.

Ms Jayapal said she had remained “in very close contact with the White House,” and Progressives said they were encouraged by the message they had received from Ron Klain, the White House chief of staff.

In meetings and discussions with progressive lawmakers, Mr Klain has been adamant about the President’s belief that Democrats must reach a framework agreement on broader social policy legislation before they can approve the infrastructure measure, according to three officials familiar with the discussions.

This seems to have emboldened the progressives.

A person familiar with Mr Klain’s calls said they left liberal lawmakers with the impression the White House was urging them to ‘stand firm’ against a vote on infrastructure until a deal could be reached with two centrist Democratic senators, Joe Manchin III of West Virginia. and Arizona’s Kyrsten Sinema, who called for changes to Mr. Biden’s $ 3.5 trillion plan.

Progressives feared that if the infrastructure bill passed, giving moderate Democrats a big victory, Mr. Manchin and Ms. Sinema would have little incentive to give in to demands from the White House and progressives to retain as much as possible. $ 3.5 from Mr. Biden. a thousand billion proposals.

Mr. Klain retweeted a social media post from Representative Jared Huffman, Democrat of California and member of the Progressive Caucus, who said they were “putting the Biden agenda back on track” by delaying the infrastructure vote.

â€œThe suggestion that Ron Klain or someone in the White House urged members to vote against or oppose any aspect of the president’s platform is false and doesn’t even make sense,â€ said Jen Psaki, the White House press secretary. “The caucus members have been pretty clear on where they stand and what they need from their fellow congressmen to move forward and our goal has been to try to move the process forward to bring relief to the people. American”

On Saturday, Ms Jayapal said the White House had not pressured progressives against the passage of the infrastructure bill and did not need it. â€œFrankly, no one could have changed our minds,â€ she said.

Ms Jayapal said she plans to be in Washington all weekend to negotiate the legislation and continue to push for a vote on the $ 3.5 trillion reconciliation bill before proceeding with the bill. on infrastructure.

But she left the door open to soften her stance.

“If there is anything other than a vote that someone can offer me that gives me the same assurances, I want to listen to it,” she said.

A senior Democratic official not authorized to speak publicly said Ms Jayapal’s pressure for a vote on the broader bill was initially unrealistic and urged her to firmly back down.

“The president made it clear that the plan remains as the speaker and leaders described it: to come to an agreement, then move forward with the bipartite infrastructure framework,” the aide said. â€œThis is not the position of the progressives as described by Representative Jayapal. We hope the member will change course and support the president. “

The progressive lawmakers’ stand this week came amid a surge in activism targeting Congress from the left. On Thursday, protesters held up signs in front of the Capitol saying “Put reconciliation first” and another group of activists rowed kayaks to confront Mr Manchin in the waters beside his large barge moored in a marina in Washington.

Before the infrastructure vote was delayed Thursday night, Ms. Jayapal warned caucus members not to cheer if they succeed in stopping the bill in its tracks, according to a person familiar with her comments.

But their success fueled an already poisoned relationship between some liberal Democrats and their more moderate colleagues.

Representative Ilhan Omar, Democrat of Minnesota, on Thursday night targeted Representative Josh Gottheimer of New Jersey, a prominent centrist who had confidently said he was “1,000 percent” sure that the infrastructure would be adopted that day.

“In Congress, we don’t make predictions like this until we know we have the voices,” Ms. Omar wrote on Twitter. â€œSome of us understand this, others bluff and fall on our faces. Hopefully @JoshGottheimer and the remaining 4% Democrats won’t obstruct but negotiate and help us deliver @POTUS’s agenda for the people. “

In a statement Friday evening, Mr. Gottheimer lamented that “President Pelosi violated her firm and public commitment to members of Congress and the American people to hold a vote” and attacked a “small faction of leftmost”.

“This far-left faction is ready to jeopardize the president’s entire program, including this historic bipartisan infrastructure package,” he said. â€œThey have endangered civility and bipartisan governance. “

But progressives bet their supporters wouldn’t see it that way. Ms Jayapal sent a fundraising email on Friday asking donors to donate $ 3 each to support her efforts.

â€œLast night we held the line,â€ he said. â€œWe have stopped attempts by corporate America and a few conservative Democrats to pass their little bill without President Biden’s popular Build Back Better Act that makes long overdue investments in workers, families and our communities. Businesses are FURIOUS. But the progressives are not giving in.