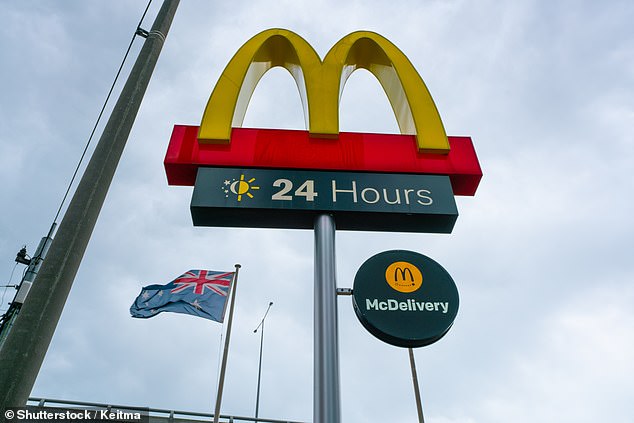 Residents of Sydney’s interior have complained that plans for a new 24-hour McDonald’s will bring “unwanted” people to the area.

Bayside Council in Sydney’s Inner South has been evaluating the drive-thru service offered on Botany Road for the past six months.

But locals and politicians say noise, trash and “anti-social behavior” will be brought to the area by the new McDonald’s.

A new 24/7 McDonald’s proposed to be built on Botany Road in Botany, a southern interior suburb of Sydney has sparked outrage among residents (pictured, a McDonald’s sign)

“Having a 24/7 McDonald’s will attract unwanted and anti-social behavior,” Botany residents Cherie and Mark Peyton wrote in a petition.

“Unwanted people will not be the only unwanted people who will be attracted in greater numbers to the area: there will be a negative impact on urban fauna, with an increase in rats.”

Another resident and neighbor of the proposed site said McDonald’s would lead to “drug trafficking in the parking lot” and potentially reduce the value of their property.

The occupants of the $ 6 million block in the industrial zone are a motorhome rental business surrounded by other industrial facilities such as a gas station.

Botanique resident Rachel Thornton filed the petition opposing the new development, claiming that the 1,000 signatures were collected in 12 days.

â€œAnyone within a hundred yards of a McDonald’s can smell it and identify it as a ‘McDonald’s smell,’ she wrote.

â€œThe constant smell of a McDonald’s would negatively affect local amenities and will no doubt extend to Sir Joseph Banks Park.

“It would go straight into the house from the houses across the street, which could no longer enjoy a peaceful evening breeze due to the constant noise and smells.”

Labor MP Matt Thistlethwaite also wrote to Bayside council to oppose the construction of McDonald’s, saying the area already had a major problem with “cars”.

Labor MP Micheal Daley said owners of local independent cafes and restaurants “stand to lose everything if this development is approved”, and that there are already four McDonald’s outlets nearby.

Bayside Mayor Joe Awada said the decision would be made by an independent local planning committee, but said he was opposed to any development operating 24/7.

McDonald’s Australia told the Sydney Morning Herald that the current store will create 100 jobs during construction and 120 once opened, and add $ 5 million to the local economy.

The Bayside board has asked McDonald’s for more information on the proposed plans, as the initial target date of March 17 approaches.

Daily Mail Australia has contacted the Bayside Council for comment.