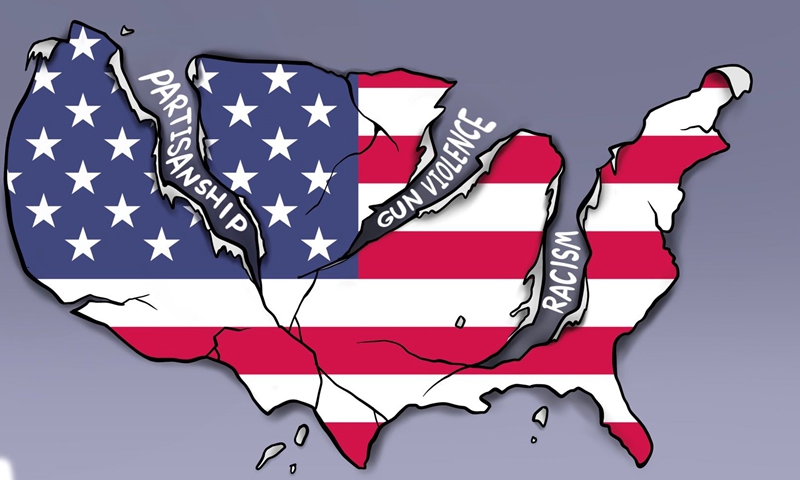 Racial disputes erupted again in the United States after a black man drove an SUV in a Christmas parade in Wisconsin on Monday, killing five and injuring 48. Following the Kyle Rittenhouse affair which sparked protests in several cities, racial antagonism erupted in American society, deepening the social divide.

When the incident happened on Sunday night, many US netizens compared the suspect’s information to an African American named Darrell Brooks and dug up his lengthy criminal record.

However, no mainstream media report could be found initially. Some conservatives tweeted, criticizing the collective silence of the US mainstream media. They attributed the silence to the fact that Brooks is black and not white, saying the black identity “does not match the narrative of the left-wing media.”

The incident occurred two days after clashes and violence erupted when Kyle Rittenhouse was acquitted of all charges after testifying that he acted in self-defense during the deadly Kenosha shooting.

Chinese experts on US studies said the issues of gun control and racial antagonism reflected in the two cases highlight the deep-rooted contradictions that exist in American society, which have become increasingly complex. and acute, and there is no effective solution at the moment.

Yuan Zheng, deputy director and senior researcher at the Institute of American Studies at the Chinese Academy of Social Sciences, told the Global Times on Tuesday that “the mainstream media in the United States has become extremely sensitive and cautious when it comes to report such cases and dare not divulge details. cases before confirming specific information.

As ethnic minorities continue to fight for their rights through frequent protests in recent years, as well as profound changes in the structure of the American population, white Americans have begun to worry about their own rights and interests. The decline in the population has made whites anxious and intensified racial confrontation, Yuan said.

Compared to the gap between rich and poor, low social mobility, stratification, and other problems in American society, it is more difficult to find short-term solutions to the racial problem. The combination of old and new issues makes social contradictions in the United States more complex, Yuan said.

When asked if Biden’s re-election would be able to change the situation, with the White House having confirmed that Joe Biden intends to run for office in 2024, Yuan doubts the success of his re-election given his advanced age, of his perceived physique. challenges and the current low approval rate.

“Even if Biden wins a second term, he may not have enough nerves or leadership to make radical changes to deep-rooted social issues,” Yuan said.

The two cases also came as the United States is actively planning a so-called “democracy summit,” a key Biden campaign promise designed to “help stop the democratic setback and erosion of rights and freedoms. in the world”.

Besides attempting to distract national attention from social conflicts by fulfilling election promises, experts said the summit was an important opportunity for the United States to increase its visibility and reaffirm its authority as the leader of the ” free world ”.

However, American democracy loses the ability to solve such problems and similar cases will happen again in the future. With more social issues politicized under partisan rivalry, the United States will suffer from worse and more intense social differences, observers noted.

The scheme cannot be considered constitutionally suspect simply because it was an election promise: SC