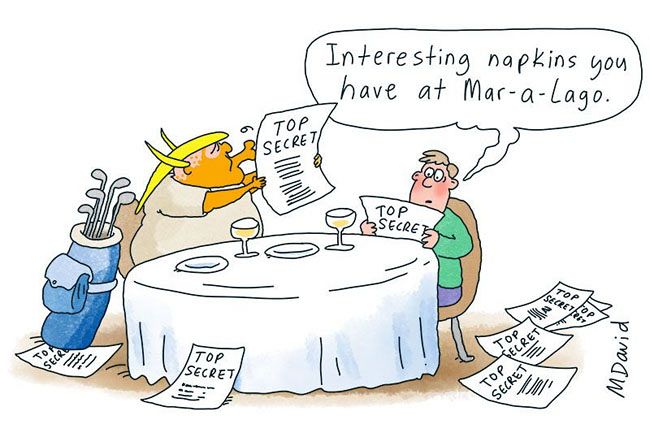 AMERICA IS a nation divided. A nation on the brink of civil war, as many claim, or buried in apathy, denial and unwillingness to engage in the tsunami of political scandals that are now daily occurrences.

As someone who has spent almost half of my life in the United States, my all-too-short trip to California after two and a half years of isolation can only be described as a glimpse of the bigger picture. I stayed with my family and met many friends and colleagues, mostly over the phone, as they are all over the country.

Social atrophy makes itself felt. People have lost personal contact with friends, staff and family due to the pandemic. Re-engaging in a social life can be a difficult journey as the growing toxic divide is ever-present in communities, neighborhoods and families.

A doctor friend told me that many people find friends to “unmask”. Not only refusing to wear one, but their rejection of any COVID-19 common sense has destroyed many long-standing relationships.

If COVID didn’t, then the political scenario is absolute certainty,

I left the United States before the FBI executed a search warrant at Mar-a-Lago, former President Donald Trump’s luxurious Florida home. Subsequently, the warrant revealed startling potential reasons for executing the warrant, including matters pertaining to the Espionage Act.

Prior to the raid, nearly everyone I spoke to, including longtime friends, was either in denial about the political war being waged by Trump and the GOP or in despair. I asked a friend (a Republican) if he would vote for Trump to take over the presidency given his history of crime, corruption and lies. He did not hesitate to answer: “I probably would.”

Asked about the morality of his decision given the Big Lie and the extraordinary evidence from the January 6 hearings, my friend got no answer. He really didn’t care. Like many Americans, he is disappointed with President Joe Biden.

It was a common attitude that I encountered. It could be described as the “I don’t care” syndrome, but it could well be a growing symptom of a society in denial, unable to cope with the monstrous stressors piled on Americans in the over the past six years.

The legacy of COVID is unquestionably mental health.

A question that deserves special attention, as many non-Fox News reporters ask “how can more than a quarter of the country support Trump?” given the evidence that continues to come out in various court cases, investigations and now FBI raids.

While about half of Americans think Trump should face criminal charges for the January 6 coup attempt, about a third of Americans support Trump.

A survey found 63% of Republicans said the FBI raid was an abuse of power. Well-known Republican politicians and supporters are stirring up hatred and division.

Heidi Beirich, co-founder of the Global Project against Hatred and Extremism, said:

“The vitriol coming from extremists, white supremacists and others has been overwhelming, the Republican comments are truly disturbing as they incorporate violent rhetoric.”

It’s hard to describe the madness of Trump supporters as anything other than a symptom of madness. The Trumpsters are dividing communities and causing social chaos. Is this a symptom of deteriorating mental health resulting from COVID? If not, does the extraordinary level of support reflect a major shift in American social behavior effectively lowering standards of morality?

Michael Cohen (Trump’s former attorney) was asked why he stayed with Trump for so long given the extent of the alarming evidence on display.

Cohen replied that he was in a cult:

“…when you’re in the cult of Trump, you have no choice but to accept it.”

Maybe there is an explanation there. Cults offer solace to the lonely and to those who are economically crippled or drowned in the wealth facilitated by the corruption of their leader.

Then there is the freedom to bear arms. Who knows who is armed in public situations?

According to Bloomberg, Americans have more guns than anywhere else in the world:

‘[The] The United States has 120.5 guns per 100 people. [It is the] only country with more civilian-owned guns than people.

American gun owners own 393.3 million guns according to a 2018 report by the Small Arms Survey.

Inflation really has an impact. A small Mexican papaya cost my friend $10 (AU$14.27); it was only slightly larger than a large grapefruit. All fruits and vegetables, bread and basic foods are more expensive than when I last visited almost three years ago.

There is a definite sense of urgency among the general public to party and go to restaurants, bookstores, cafes, markets and malls. People are gathering in large numbers at cafes that have taken over the sidewalks to avoid eating indoors. Most seem eager to get back to “normal” as soon as possible. Aside from a minority wearing masks, life goes on.

Yet there is no normality.

Airports are crowded with unmasked people. Flying on domestic flights stuck next to each other with hardly any masks on passengers is a leap of faith, especially if someone nearby is coughing.

No one talks politics. No one is talking about COVID. Hotels are visibly cleaned, but many in-house restaurants are closed due to a lack of staff.

In San Francisco and Los Angeles, the signs of economic activity are very visible. Giant cranes, infrastructure, road repairs, plans for buildings and offices are underway.

At Los Angeles Airport, an underground train station and a rail line are being built, with noise and disturbance passing through huge open areas.

My brief visit to an isolated hot spring a few hours from San Francisco was a firsthand glimpse into the ferocious effects of the drought. The streams have dried up, the rivers are drying up, the land is parched and there are few signs of life. Water is scarce in most towns but there is no rationing or curfew.

In many ways, my visit to the United States was like a schizophrenic experience with two totally different realities. Without the lethal influence and vitriol stirred up by Trump and his supporters, America can undoubtedly recover economically and socially.

But unless Attorney General Merrick Garland has the guts to indict Trump on a series of charges, the potential for civil war and the breakdown of democratic society is impossible to ignore.

Living in denial should not be an option.

Sue Arnold is an AI columnist and freelance investigative journalist. You can follow Sue on Twitter @koalacrisis.